While the world is watching the civil war in Ukraine the European economics is sliding into oblivion. The Manufacturing PMI tells a story that should scare the hell out of the politicians of EU – so bad the business dynamics in manufacturing looks. 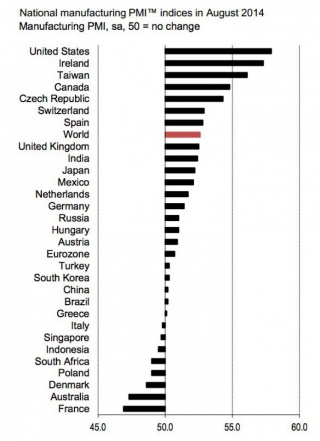 In August, out of 26 countries, only 9 reported improvement in the index, 15 recorded a slowdown in the two countries has not changed. In fairness it should be noted that 21 countries report PMI is still above the level of 50 points, and below only 5. But it is not so important, because the dynamics is still downward. There are those who are moving in the right direction: in Greece and Turkey business activity index in August was able to finally overcome the mark of 50 points. The rest of Europe presents a serious reason for concern, whether peripheral or central: everywhere there are signs of a serious recession.

United States, on the other hand, sports the best activity indicator in the world. PMI index has reached its highest level since April 2010 and reached 57.9 points. In case of U.S., the export orders component grew at the fastest pace in three years, and the employment component showed maximum growth from March 2013. In general, things are going very well in the United States: the ISM Manufacturing Index rose to a new high of over three years, reaching 59 points, while the new orders component has been growing for 15 months in a row and reached a 10 year maximum.

By the way, Russia, which is the country everyone wants to “punish”, seems to benefit greatly from the story of all the “sanctions” against it. PMI index in the manufacturing sector exceeded 50 points for the first time since February. Sanctions provided the impetus for the development of the internal market, for the development of agriculture and other industries, so Russia is on the rise. Europe, however, was not quite ready for the Russian response, apparently. It is not clear what the European officials thought when imposing sanctions on Russia. Additionally, it may be worth noting that a strong Europe is probably not interesting now neither for the United States nor for Russia. 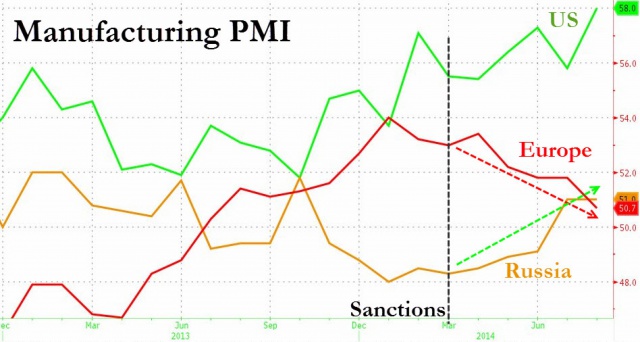 Summarizing the above, we can say the slowdown in the world kills almost all hope that the global economy will be able to embark on a path of strong growth. There is more or less only one country where all is well. This is, of course, the United States, which fueled worldwide military conflicts and benefited from them, weakening other countries and strengthening their own world domination.