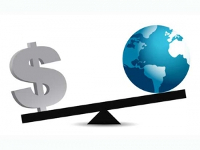 For example, manufacturing activities which cause air pollution impose health and clean-up costs on the whole society, while the neighbors of an individual who chooses to fire-proof his home may benefit from a reduced risk of a fire spreading to their own houses. If external costs exist, such as pollution, the producer may choose to produce more of the product than would be produced if he were required to pay all associated environmental costs. If there are external benefits, such as in public safety, less of the good may be produced than would be the case if the producer were to receive payment for the external benefits to others. For the purposes of these statements, overall cost and benefit to society is defined as the sum of the imputed monetary value of benefits and costs to all parties involved.[2][3] Thus, it is said that, for goods with externalities, unregulated market prices do not reflect the full social costs or benefit of the transaction.

The externalities are absolutely crucial for the existence of the software industry as we know it today. Actually, if you listen carefully, many software manufacturers and vendors openly claim that if they could not use the externalities, could not pass a large share of costs on to the society, the industry would not exist at all.

Every software company is on the run to produce more cheap software that sort of works. That software then needs to be installed an configured by consultants, otherwise it won’t work. Then it has to be patched, otherwise it won’t work right. And, of course, it needs a much larger infrastructure than the task at hand would suggest. Not to mention the lost time and productivity opportunity  cost. All of that are costs that are externalized by the software vendor and passed onto the society.

Someone somewhere will have to pay for it, as is the case with all externalities. Those costs cannot be avoided, those costs will have to incurred and paid by the society. The problem is that if they were paid at source, the costs would be smaller than if the costs have to be paid many times over by the people around the world. The cost would be smaller for the society.

The software manufacturers of today are addicted to the externalities like drugs. The corporations cannot stop inventing more ways to pass more externalities on to us, the society at large and to create higher profits at the expense of the global costs to society.

I reckon it is not true that we would not have a software industry if the externalities could not be used. I bet we would have a very different software industry though. It would develop at a slower pace at the beginning, perhaps, but we would get quality at every step and we could be sure that things work. That would cause much stronger progress in the long term.

The software manufacturing uses its own industry’s produce to manufacturer more. The costs are incurred in the software manufacturing process as the result of the software industry passing the externalities onto itself. The software industry suffers from its own low quality as much or more than everyone else. Removing those costs would lead to a higher level of productivity and higher quality overall in the long run. Eventually, this different world would have overtaken the world as we know today because our costs are mounting up and theirs would not.

I think we will have to switch over to the internalization of externalities by the software industries to prevent a collapse under the burden of its own externalities. I would like to see this switch start happening sooner rather than later.