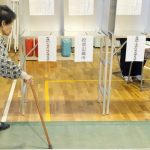 Despite all, the election is literally trumpeted as an indication of overwhelming support for the policies of Abe’s government despite the obvious apathy of the people. The hype has started already.

“I believe the public approved of two years of our ‘Abenomics’ policies,” Mr Abe said in an interview.

Finance Minister Taro Aso, who retained his seat in parliament, told reporters that the predicted win “shows that voters gave the Abe administration a positive evaluation over the past two years”.

That statement twists the truth. Most of voters could not be bothered to come out and vote. That shows indifference, not approval. Most people were talked into believing that the only viable alternative – the Democratic Party – is not an alternative anymore after they did not manage to deliver in 2009-2012. Actually, given the huge financial crisis, the earthquake and the tsunami, I reckon the Democratic Party did a good job at the time keeping the country up and running.

But who cares? The situation is already twisted the way the powers want it to be. There will be no doubt that the current government will continue its course with a vengeance. The reforms are coming through whether you want them or not.

So, what is in the future for Japan then? It’s a mixed stock. On the one hand, it is great that the nuclear power plants will likely be restarted and the country will end its short-lived dependence on external sources of fuel for power generation. That will cure the international trade deficit. On the other hand, the course towards inflation will mean worsening conditions for the majority of the people and a radical weakening of the Japanese economy.

Japan will resist for a while but we will see the same things happening in the long term as we see in other developed countries with unstable economies: increase of the disparity between rich and poor, skyrocketing costs of living and accommodation, devaluing of money, loss of public support for government and business, transfer of wealth and control from population to corporation. All of which will show nicely on the financial charts as “growth” but will result inevitably in regress of the society.