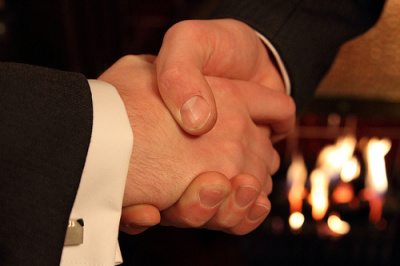 Personal relations cannot replace position power, that is a simple fact. Try imagining that your manager does not have any power whatsoever over you but has to convince you to do your job as a favor to him every single day. Yes, you would probably like that but the job would not get done or there would be very little of it done. And his boss would have to convince him to do something or other and you would have to go and talk your subordinates into actually shaking a leg. That would not work, would it?

That is the problem. The statement is an overstatement. We need the position power to effectively manage a business. It is not possible to run a company just on pure goodwill, a company has a pyramidal structure for a reason and the reason is efficiency. The pyramidal structure with its position power is the efficient structure that we use to run a business. A manager is supposed to use his position power to ensure that his part of the business runs as efficiently as possible, this is his responsibility and his power reflects the responsibility.

The personal relationship power comes into play when the position power does not work. Like every structure, the pyramid has its own deficiencies. In order to overcome those deficiencies, we must use a different structure that works in parallel: the network of acquaintances, friends, colleagues bound with goodwill. That’s where the personal relationship power plays an important role – to achieve goals efficiently where the existing structure with its role power would be inefficient.

Effectively, what this does is interfere with another manager’s part. In an ideal company, where every manager runs his show as efficiently as possible, only two distinct cases would justify this interference from the point of view of the company. One is when you clearly see that the other manager is not managing his part as efficiently as he could and you are able to help. Or you could be asking someone to help you with running your part as efficient as possible. This improves a part of the company hopefully making it more efficient overall.

In the above two cases the use of personal power would be justified from the point of view of this ideal company but would not be justified in any other case. All other cases would constitute an abuse of the personal relationship power for personal gain and to the detriment of the company.