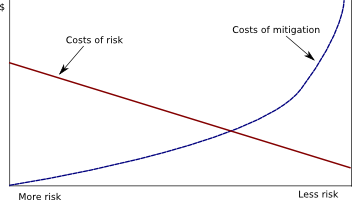 A “traditional” risk cost versus mitigation cost trade off graph.

On the other hand, the cost of risk is easily infinite when it causes your business to go bust. Usually, this kind of situation is taken separately and considered an “existence threatening” risk that has to be handled separately for no apparent reason. Risk may be so high that you cannot afford it, so the cost of such a risk level is infinite and this has to be depicted in the diagram. 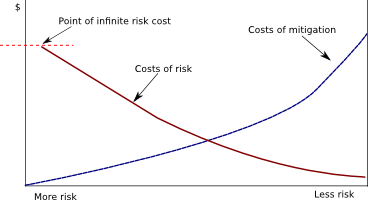 A more realistic trade off between risk and mitigation cost.

Given these observations, the graph looks more realistic and does highlight two important things. First, there is a level of risk you cannot afford, i.e. you must invest into mitigation at least what it takes to move out of the “infinite risk” level. Second, the graph causes one to take a more conservative, more risk-averse position automatically. For a business, this may be a good thing.